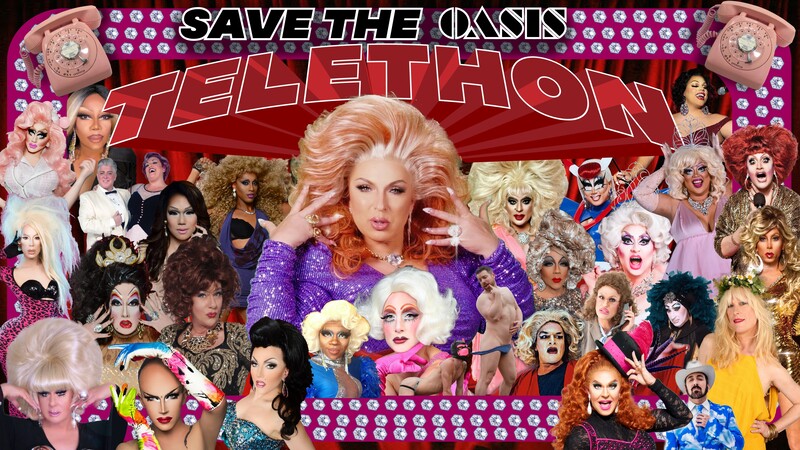 With my many posts about D'Arcy Drollinger, you might think that I am the PR person for Bay Area native Drollinger. But he and his club need our help - and right now!

Drollinger, and the SF Oasis nightclub, can use our help now more than ever. Like any small business, they have been severely hit by the pandemic. As you read on, you can see some of the creative ways Drollinger has tried to earn monies. Now, they are even adding a 12-hour telethon on March 6. Tune in watch.sfoasis.com or www.givebutter.com/saveoasis to help. During the telethon from 12pm to 12am you can also call in your pledge to 415-742-1044 and who knows what local legend might answer the phone.

You've missed many of the shows this year due to the pandemic - so use the money you would have spent on tickets and drinks and donate to SF Oasis.

Truth be told, Drollinger has tried so many ways to make monies to keep the club alive - as well as all of the people who work there. Drollinger keeps reinventing and reimaging his role in entertainment that it causes one to pay attention. (I decided not to use 2020's overused word: pivot.)

More about Drollinger...D'Arcy came back to town in 2011 as a seasoned writer, director, actor and drag queen. D'Arcy is one of those beautiful names that can be used as a man or a woman so even in drag, he's still D'Arcy. Or, SHE'S still D'Arcy.

Besides making a name for himself in many campy drag versions of "Sex and the City" and "The Golden Girls," Drollinger has entertained us all in original productions that he has written and directed including his trilogy surrounding the smash stage hit "Shit & Champagne."

Drollinger soon became a staple in our entertainment community, buying and vamping up the Oasis night club South of Market San Francisco. In the hands of Drollinger and his business partner Heklina, SF Oasis became the toast of the town. And what formula they came up with. First, around 5pm, they'd have in the stage area announcement events and charity events, like the press announcement for the annual Frameline Film Festival or even when someone announcements they are running for Empress in the Imperial Court System.

Then 7pm, SF Oasis became the West Coast's very own Off-Broadway theatre. Not only for terrific dragged-up versions of shows like "Sex," "Golden," "Three's Company" and even "Star Trek," but a showcase for local talents other than Drollinger such as Michael Phillis' "Baloney" vaudeville show and "Patty from HR."

Later in the evening, SFOasis became one of the city's hottest night clubs. Whether it's a drag-themed night with many RuPaul alum, or a bear night, diva tribute, lesbian night - any night can be any theme with a dance beat to keep us all on our toes to music we want, if you go your favorite theme night.

The pandemic hit and the rent still needed to be paid. Drollinger once again thought outside the box. He pulled out of archive filmed versions of beloved drag shows that he retained mainly for staging and costuming when the shows returned. Then, while doing these shows, which helped keep his audience engaged during trouble times, they still needed money for that rent and to survive. Drollinger came up with Meals on Heels, where he'd partner with restaurants and caterers and get drag queens to deliver dinners in heels and with a song in their heart. This made some money and certainly helped us all feel a little sparkle at home when we are sheltering in place.

Also, some how, in the middle of all of this, Drollinger managed to make a movie - the big-screen adaptation of "Shit & Champagne." It made its world premiere at the San Francisco International Film Festival last year in April. You remember April? COVID month two! Like everything else, Drollinger helped turn that cancelled show into one of the first drive-in events and on went the show. Drollinger said the rest of us might be able to see it this September.

Drollinger then started to film - with a crew that quarantined - some more original programs. The talk show "Hot Trash" not only was amazingly entertaining but it was also very newsworthy. It quickly became my #1 news feed.

Drollinger tried really hard to find a sponsor. He actually did a lot of mentions on the show of White Claw and blatantly said on camera they'd be a good sponsor.

Since the sponsorship never happened and the rent and other bills need to be paid, Drollinger has taken all he's done so far, mixed in a magic blender and has come out with OasisTV. Sure SF Oasis has a YouTube channel, but now this is a paid streaming channel like a Netflix or Amazon but with more queer-oriented content, helping local talent.

Drollinger now is doing the great drag TV shows as they've done them before - but now they are filming them with a TV audience in mind with multiple cameras and editing - just like our sitcoms from days gone by - all that's missing is the live studio audience.

Further, Drollinger is including other original content from her troupe of talented colleagues. In addition to "Hot Trash" and a spinoff show "Talkin' Snacks with Snaxx," "Patty from HR" is on the roster and the original locally-produced web series "Gay Husbands of San Francisco."

Sure all of this is to survive. But Drollinger still feels proud of all that he's been able to accomplish.  Give OasisTV a try. There's a nice trial basis offered at watch.sfoasis.com and tune in March 6 for the telethon - or lend your support now.