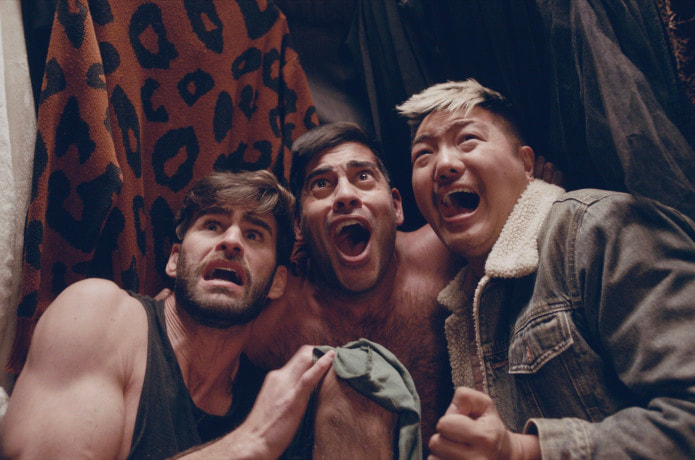 First San Francisco. Then Palm Springs. Now Atlanta. I feel like a jetsetter. Yet, I haven't left my house.

I was invited to "attend" another film festival and I am able to go without leaving my home. Out on Film, Atlanta's fantastic LGBTQ film festival held Sept. 24-Oct. 4, features some great movies - no matter where you live. Here are some highlights of movies I've seen - but still wasn't able to see them all.

I've seen and reported on many of these movies, but here's some I hadn't seen until just recently.

"Give or Take" is a tender and beautifully told story of an adult son that comes back home after his father dies, where he learns more about his father from his partner - played by Tony-winning actor Norbert Leo Butz giving a bravura performance. The whole cast elevates the story, including Jamie Effros as the adult son (and he also co-wrote the screenplay) and Cheri Oteri who brings a lot of her quirkiness to her role. Theatre lovers will enjoy an in-joke with a reference to "Wicked," a musical that featured Butz.

"Luz" surprised me with the tenderness considering it's a story of men who meet in prison. Sexy, poignant and real, I will remember "Luz" for a long time to come. Director/writer Jon Garcia ("The Falls")  has continued to surprise me with the nuances he finds in his stories and this is perhaps his best work to date.

"The Capote Tapes" on paper doesn't seem interesting as it's about listening to tapes from a Truman Capote interview. But it is brought to life with visuals and historical footage that it makes the movie as captivating as the man himself.

"Music for Bleeding Hearts" from Brazilian writer/director Raphael Gomes is already an award-winning film and it confirms that so much great LGBTQ content has been coming out of Brazil! It's a wonderful movie that integrates various storylines of characters and their love lives, all set to amazing music which proves music is the international language of love.

"After Forever" while not a movie, it's an amazing web series that is also on Amazon. This show is one of the few web series that made a big splash with the Emmy Awards last year and continues to be the perfect thing to watch when you kind of want a soap opera and to see a parade of Broadway stars. I screened the premiere episode at my WebOUT program last year to a great response. Wonderful and surprising from start to finish thanks mostly to Kevin Spirtas and Michael Slade.

"Catfish Killer" is likely amazing. I am cheating recommending something I've never seen but it has two actors who I trust to make good choices: Chris Salvatore (who keeps proving he's more than a handsome face) and Stephen Guarino.

"Sordid Lives" is one of the festival's fun retrospectives. Writer Del Shores always has an interesting way of looking at things and his dialog in this movie proves it. Add a southern accent, toss in Leslie Jordan and Delta Berke, and I am there....well, virtually.

"Fame" is a movie that is timeless. I can't believe it came out in 1980! I am sorry I won't be in Atlanta to catch it at the drive-in but if you're there, see the movie that won Oscars for its music, lead to a successful TV series and features a great performance from Anne Meara, who should have been up for an Oscar herself.

If you missed these are recent festivals, here's your chance. Check out these following winners screening virtually at Out on Film.

"No Hard Feelings" is an interesting look at young gay life. A young German man who seems very comfortable with his sexuality and the casualness of it develops an attraction for a somewhat closeted young man. Knowing their relationship might be temporary, the bond of the two men gets stronger and seems real and earnest.

"Cicada" is also a very sexual film in which New Yorker Ben, who is as fluid as you can get, pulls the breaks on his flings when feelings develop for Sam. The story is so much more than a look into someone's gay sex life as it shows more substance as Ben starts to let Sam into his head as well as his body. Might not have needed the flippant therapist, but getting into Ben's psyche and hearing his back story was quite moving.

"Through the Glass Darkly" is the cinematic equivalent of putting together a complex puzzle. Director/co-writer Lauren Fash has made quite an emotional and psychological drama here about a mother looking for her missing daughter. I can't say more as this movie is full of surprises and twists - but it's one of those small films that could be a big hit with a mainstream audience as well - especially with the bravura performance of Robin Lively.

"Monsoon" brings us Henry Golding from "Crazy Rich Asians" whose character gets sidetracked from exploring his family roots by an old flame. Golding has another winner on his hands and shows not only his diversity as an actor but further goes down the heartthrob lane.

"Gossamer Folds" is the best of the fest! Many of these film festival movies are terrific but this tale of a straight family that moves next door to a transwoman and the family goes out of their way to make to tell the neighborhood that they do not accept her lifestyle. That brief scenario sounds trite, but this just one aspect of this film which is also heartwarming and empowering. There are so many layers and it was a pleasure to watch them unfold. Further, star Alexandra Grey is my new talent to follow!

"Dry Wind" is the most sexual film at the festival. It's more than titillating as we follow a man's journey to self-discovery and adoration of others. Director Daniel Nolasco takes an almost Walter Mitty approach as our led character bearish Sandro (Leandro Faria Lelo) is somewhat bored with his life so he mentally escapes to a sexier, sometimes kinkier place. Is it all a fantasy or is it real?

"Ellie & Abbie (And Ellie's Dead Aunt)" is a magical feel-good film about first love. Our young heroine Ellie (Sophie Hawkshaw) seeks advice from her aunt, who happens to be dead. Fresh and wonderful, writer/director Monica Zanetti has made one of the most endearing films that leave you happy (so important in these tough times).

"Cured" is a hard movie to watch as it shows the growth of the classification of homosexuality  - are we mentally ill? Is it a lifestyle? The film takes us through conversion therapy to shock therapy and leaves us feeling we've made such progress in this area. Shocking information and not sugar-coated, it's truly a documentary that needs exploring.

"Breaking Fast" also uplifts the spirit as it tells the tale of shy Mo, a gay Muslim in West Hollywood, who finds his own superman in a sea of sex app horndogs and partiers. Both men have their own perspective on dating, life and love - and it's beautiful to see how the two men and their cultures blend. Haaz Sleiman (from the festival hit "Those People" in 2015) is quite a different character here and has amazing on-screen chemistry with co-star Michael Cassidy.  The rest of the cast is uniformly excellent and it also highlights ethnic differences via food, which elevates the film and its cultural lessons.

"Twilight's Kiss (Suk Suk)" offers a refreshing spin on a familiar story. We've all seen many movies where "straight" people meet their secret same-sex loves while not embracing their own gay sexuality. But this time around, our characters are two senior citizen grandfathers that, due to the time they were brought up, they could not come out. The love and sensuality between our characters is magical and beautiful. This movie from Hong Kong also benefits for not being Americanized where the two characters have Hollywood faces and male model bodies. Instead, they seem like real people, complete with real people physical attributes.

There's so much more so check it out and join me! Go to www.outonfilm.org for full details.